Outfit Spotlight: Ghosts of the Revolution 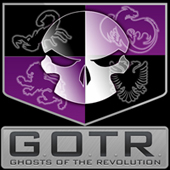 With the ever-looming excitement of PlanetSide 2 and Beta just around the corner we are pleased to bring you the first ever Outfit Spotlight!  It is our goal to provide a service for both Outfits and the Community to stay well informed on who is controlling the battlefield, as well as a potential recruitment platform.  Our first selected Outfit has been around since Beta of PlanetSide and has stayed strong in continuing their fight on Auraxis resulting in the organization you see today!  Without further adieu, here is Ghosts Of The Revolution

What is the official name of your Outfit? Also any nicknames that you all would be infamous for! (Don't be afraid to give us the smash talk name the other Empires call you guys!)

The official name of the outfit is Ghosts of the Revolution. I didn't choose it, but I like it a ton and if I remember correctly it refers to the backstory of PS - the "revolution" the NC and VS executed to break away from the Terran Republic. And hey, "ghosts" sounds cool, right? As I said, I didn't choose it, but I like it. I will say I've been surprised over the years that we haven't been given any nicknames by the other empires. We have been ragged upon because our acronym is spelled "GO TR" but other than that, not really anything negative.

GOTR was created with one thing in mind: total battlefield domination. No matter what your playstyle is in Planetside, we can find a use for you. Support, heavy HA hitter, reaver pilot, ninja medic (yes, we've had a couple of cloakers dedicated to being medics) or what have you, we will find somewhere to put you. We utilize three divisions within the outfit: infantry (the 555th Death Angels), armor and air (the Fallen Elite Armored Regiment, or FEAR), and special ops (Daemon Legion). We have had many subdivisions and special teams over the years and I could probably write them all down but I don't want to bore you. The point is, we try to group people by their playstyle and use them as a machine that's greater than the sum of its parts.

Would you consider your organization as infamous in the original Planetside?

Definitely. Probably more infamous during the first few years due to massive numbers and our most famous outfit leader, Guru. We're still one of the largest active outfits in the game though, and I would say easily the most continuously active "large" outfit. Other outfits have had periods of inactivity, or have gone on hiatus to other games, but GOTR is one of the few that has stuck to PS since day 1. We were also the first outfit to reach 10 million outfit points on the Emerald server, and possibly in the entire game - I don't know for certain. I probably prefer the term "well known" to "infamous" except for one night every few months when we do the Rick James MAXperience. On those days, I like to use the phrase Infamous. There are videos on youtube that make it pretty clear what one of these nights entails.

If so, what (in your opinion) was your organizations finest moment?

Circa 2005? 2004? There was a rabbit event on Cyssor, I think, and the way one of our members tells it, the VS simply weren't involved. We didn't have any bases, the fight was completely two-sided between TR and NC. VS were off on another continent ignoring the rabbit. What happened next, he says, was that all of GOTR got into vehicles at sanc and hit the rabbit like a tank shell hits a pigeon. The TR and NC were easily within a few minutes of capping the rabbit, with VS at almost zero points, and we smashed into the rabbit area with an army. And we took it. Without bases, without empire support, just GOTR against the NC and TR, we took the rabbit event from 0 to 1000 and won the continent. I'm told that it was such an upset that the CSRs locked the continent for us for two days instead of one, because "it was just that awesome". We have screenshots somewhere, I'll have to ask around.

When was your Outfit formed?

GOTR was formed within the first day of Planetside's launch, continued from members playing in the beta during 2003. Our outfit window says one day after launch, technically, but I think this was simply a time zone issue. We were there during the beta and made on the first day, the OL at the time just might not have been able to hit the Outfit Create button within the first few hours

For recruitment reasons, what would you like a newbie to know if he/she is prospecting to join your organization?

We will take you in and teach you the game as best we can. Throughout the years we've amassed considerable knowledge on PS1 and hope to do the same in PS2. We want to be able to assemble the masses of casual players into a force to be reckoned with, so if you like organization, voice comms, events that will make you die laughing, and raffles (yes, raffles) then join us. I would say that GOTR has hands-down run the most "events" of any organization in Planetside's history, both inside the outfit and outside (like the infamous Lodestar Derby). So if you want an outfit with experience in the field of organizing massive numbers, you've come to the right place. We aren't complete control freaks on voice, you're free to shoot the breeze with your mates and we encourage you to do so, just know when to shoot the breeze and know when to focus on shooting the enemy.

And for the rest of the community what would you like them to know about your organization?

Hi, we're GOTR. No, we aren't trying to be like the leetfits, we do things a different way here. No, we aren't a "zerg fit", because zerg implies lack of communication and organization. We're simply a large outfit, one of the first large outfits. If you're on VS we will work with you most of the time, but don't take it personally if you call for our help and we give our objective more priority. That's how we roll - the empire always comes first, but we might not share your idea of what needs to be done. This doesn't mean we hate you, this doesn't mean we think you're a noob, it just means that, at that time, we think we have another way. As for the non-VS community, we look forward to some fantastic fights in PS2 and hope to get some interoutfit combat going on whether it's facilitated or not.

Do you have any special Outfit events planned for the upcoming months?

Two nights ago we joined up with Azure Twilight and Juggernauts to pull off a warpgate denial on the entire NC empire. Helheim and Ikanam were drained and NC no longer had access to broadcast warpgates. As for things planned in the upcoming months, you might see one last Rick James night sometime soon - but every Sunday we'll be doing a themed raid like we usually do, so watch out for thirty or forty lightnings / reavers / lodestars / snipers / beamers. It will probably be us.

Does your organization play any other games?

We're currently in the process of expanding. We have a branch in SWTOR and many of us play League of Legends - we are currently working on establishing a guild in Guild Wars 2. We have our own Minecraft server and there are constantly members searching for new games to play. Over the past year or two we've tried Warhammer, Space Marine, Face of Mankind, EVE, Rift, Shores of Hazeron, Stellar Impact, Nuclear Dawn, APB: Reloaded, Fallen Earth, other smaller RPGs and countless RTSes and FPSes, both made by large corporations and independent developers. The one we've always played is Planetside, and we're hoping for Planetside 2 soon because simply put, nothing else compares.

Does your organization have an end goal in mind? (I.E. largest Outfit on [Server name]?)

Simply to be the largest, most organized, most comprehensive invasion force on the VS. We want to do it all - air, armor, infantry, support, spec ops. We want to organize with the other VS outfits and make the Vanu Sovereignty supreme on whatever server we end up on. We aren't a two-squad resecure team, we're a legion.

With PlanetSide 2 drawing closer and closer what are your anticipations and hopes?

Above all else, we hope many, or at least some, of the inactive members return to us. The guys that were dedicated beyond all else but simply didn't like the new content like the BFRs and the caverns - we want them back! The players that made GOTR great years ago, the ones that really gave the outfit the leg up on the competition. We still have some of those veterans with us, obviously, but a lot of them left years ago for WoW or EVE because of Core Combat. We've gotten emails from them saying they're interested in Planetside 2, we hope they come back to join us.

Is there a wishlist that your organization has for PlanetSide 2?

We want an aircraft carrier, mothership, private island, flying tower, something. That would be ideal. Seriously though, we just want more outfit stuff. In PS1 we had a roster and a chat channel, and a preset logo, that was it. Give us something MORE, please, anything. Customizable ranks, customizable logo, special unlockables, something. More outfit stuff in general.

If you feel inclined please list any members within your organization that potential applicants can get in contact with.

And don't forget to check out their website @ http://www.gotr.us!